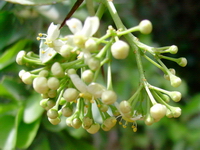 The spike thorn has a powerful energy that speaks of  “Christ Consciousness” – a term described by Edgar Cayce* as “the  awareness within each soul, imprinted in pattern on the mind and waiting  to be awakened by the will, of the soul’s oneness with God.”

Spike thorn softens the heart and teaches the value  of surrender. It encourages expression of the true self – so that one´s  words become like song birds set free. The spike thorn may balance  feelings of limitation, bitterness and spiteful anger with compassion,  devotion and a sense of being at one with the flow of life. *Edgar Cayce (1877-1945) has been called  the “sleeping prophet,” the “father of holistic medicine”, and the most  documented psychic of the 20th century.

This essence enlightens the heart chakrum.

Use of Spike Thorn in Energetic Space Clearing:  assists in goal setting; helps to anchor and direct the flow of energy;  use it to empower thought forms, to direct energy to a conclusion. Use  it in a protective spray.