While there is much debate and conjecture on whether our ancient ancestors celebrated all or any of the Sabbat celebrations we celebrate in modern times, the Witches Sabbats are celebrated in Modern Witchcraft and pagan practices to connect us to the cycles of the Earth – our mother, and the balance of masculine and feminine energy within ourselves.
First let’s get the terminology out of the way.  When I talk of a Sabbat, I am referring to one of the eight main celebrations that form part of the pagan calendar.  Each Sabbat marks a change in seasons or an important aspect of the wheel of the year.  The Full Moon and Dark (New) Moon rituals and celebrations are referred to as Esbats and are normally very private affairs, while Sabbats are normally celebrated in a more “public” way with some covens and groups inviting interested outsiders to participate or observe the ritual and celebration.
The Sabbats are divided into two main categories: The Greater Sabbats that mark high energy points in the year (Samhain, Imbolc, Beltane and Lammas), and the Lesser Sabbats that fall on the Equinoxes and solstices (Yule, Ostara, Litha and Mabon).
The Sabbats also mark the seasonal cycles and the process of birth, growth, death and rebirth.  Different traditions, have different legends and folklore attached to the Sabbats in terms of the processes etc followed but all connect to the Turning of the Wheel of the Year and changes in seasons. 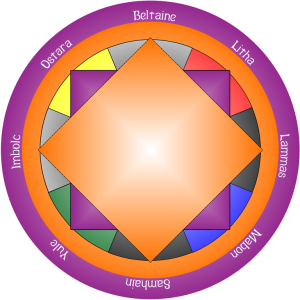 Yule (Lesser Sabbat – Winter Solstice)
(Depends on the Astrological Winter Solstice: Southern Hemisphere around 21 June / Northern Hemisphere around 21 December)
Yule (pronounced YOOL) is celebrated at the winter solstice and indicates the middle of winter, when the darkness starts receding and light comes once again to the Earth.  Many of the traditions celebrated at the Christian Christmas are based on Yule celebrations; the evergreen tree, the gift giving old man, the colours red and green, mistletoe and the list goes on … .
At Yule we celebrate the birth of the Sun King and the return of light and warmth as the seasons move toward summer.  This is a time of refocusing energy for the new year and setting of goals and dreams.

Imbolc (Greater Sabbat)
(Southern Hemisphere around  1 August / Northern Hemisphere around 2 February)
Imbolc (pronounced IM-bolk) celebrates the first stirrings of spring.  A time where growth is happening under the earth where we are not aware of it yet.  It is a festival that reminds us to keep focussed on our goals and dreams, even though nothing seems to be happening.  It is the time of year when we celebrate with fire and candles to bring light to the earth as the darkness of winter clears and makes way for the joy of summer.

Ostara (Lesser Sabbat – Spring Equinox)
(Depends on the Astrological Spring Equinox: Southern Hemisphere around 21 September / Northern Hemisphere around 22 March)
Ostara  (pronounced OH-sta-ra) is the celebration of new life and spring. Once again many of the traditions of Ostara have been taken over by the Christian celebration of Easter.  This is when new shoots are seen on the trees and plants start pushing through the earth to flourish and blossom in Summer. Seeds, eggs and spring flowers are used to celebrate this festival as we see our goals starting to take shape, it is a time to tweak these goals as they grow and manifest.

Beltane (Greater Sabbat)
(Southern Hemisphere around 1 November / Northern Hemisphere around 1 May)
Beltane (pronounced BEL-tayne) is a celebration of fertility and plenty.   It literally translates as the Fires of Bel. This is the transition between spring and summer when everything is blooming and blossoming.  Beltane is a fire festival and celebrations often include Dancing the Maypole which represents the binding of the semen of the god and the menstrual blood of the goddess into the creation of new life.  Beltane is one of the biggest celebrations of the pagan year.

Litha (Lesser Sabbat – Summer Solstice)
(Depends on the astrological Summer Solstice: Southern Hemisphere around 21 December / Northern Hemisphere around 21 June)
Litha (pronounced LEE-tha) is a celebration of the pinnacle of summer.  This is also a time to remember however that everything is a cycle, and as we celebrate the joy and fertility of summer, we also need to remember the cold and dark of winter is not far off.  It is the time of the longest day and shortest night of the year and is a time of celebration and joy.

Lammas or Lughnassadh (Greater Sabbat)
(Southern Hemisphere around 1 February / Northern Hemisphere around  1 August)
Lammas (pronounced LAM-as) is the first harvest festival.  This is a time when we start reaping the fruits of our labours for the year. Traditionally grains were harvested around this time and there was a great celebration of the bounty of the harvest.  This is also a time where traditionally the effectiveness of the king was assessed….if the harvest wasn’t good, the king’s relationship with the goddess was called into question.

Mabon (Lesser Sabbat – Autumn Equinox)
(Depends on the astrological equinox: Southern Hemisphere around 20 March / Northern Hemisphere around 21 September)
Mabon (pronounced MA-bon) is the second harvest festival and is again a time to evaluate our goals and objectives for the past year.  Letting go of the things that no longer serve us and embracing the success of the past year.  It is a time of thanksgiving and celebration.  Night and day are once again equal as the wheel turns towards winter

Samhain (Greater Sabbat)
(Southern Hemisphere around 30 April -1 May/ Northern Hemisphere around 31 October – 1 November)
Samhain (pronounced SOW-wen) is the beginning and end of the pagan year and is the festival that modern day Halloween is based on.  It marks the beginning of Winter.  It is a harvest festival and as such is a time of reflection on the past year.  It is also a time when the vale between the world of the living and world of the dead is the thinnest and some of the traditional activities practiced at Samhain include divination, communication with passed loved ones and supernatural communication.  The practice of wearing masks and costumes was thought to hide the living from the vengeful dead that walk on the eve of Samhain and may harbour ill to the living.

The Mythology of the Goddess and the God through the Wheel

The myths and legends surrounding the Goddess and the God and their relationship vary from tradition to tradition, however there are similar threads and concepts which are laid out below.  Before we get there, it is probably helpful to discuss the different aspects of the Goddess and the God.  Just as we all have a masculine and feminine aspect, in Wicca we acknowledge that the great oneness, universal consciousness has a masculine and a feminine side as well.  This duality is expressed as the Goddess and the God.  During the cycle of the year, the masculine and feminine forces of creation in the form of the Goddess and the God, change and dance around each other in the dance of the wheel.  In terms of the Wheel of the Year, the Goddess appears in three aspects: The Young Maiden, The Mother and the Crone.  The God on the other hand displays 2 Main aspects that of the Oak King or God of Light and The Holly King or God of Darkness.  So how does this relate to the Sabbats and the seasonal flow of energy….
At Yule, the Mother Goddess gives birth to the Oak King or Lord of Light; during Imbolc the Goddess nurtures her son as he grows, returning from the Underworld, they bring light and growth back to the world…At Beltane the God reaches adulthood and the Goddess appears as the maiden of spring, both full of love, joy and passion, the young lovers celebrate their love with sexual union and celebration.  By the Litha the couple are maturing and living as King and Queen of the land, the God is however faced and conquered by his shadow (the Holly King, Horned God, or King of Darkness).  At Lammas, the beaten God is sacrificed to bring life to his people in the form of grain, and goes into the Underworld as the Horned God begins his reign as protector through the winter months.  Mabon acknowledges the God’s descent into the Underworld as the Goddess grows older.  As the Goddess retreats, the world grows dark and cold, dying.  With the advent of Samhain, the Goddess, in her grief, opens the door to the Underworld as the Horned God rules the land.  During this period up to Yule, the Goddess realises that the essence of the God is in her womb, ready to be born again.  He fights his shadow once again in the womb, and this time succeeds, returning to the world as the child Sun King. The Horned God returns once again to the Underworld nursing his wounds as he prepares for his next duel with the Sun King at Litha. And so the cycle continues.
Resources
1.    The Outer Temple of Witchcraft: Christopher Penczak
2.    Solitary Witch: Silver Ravenwolf
3.    Various Websites and personal experiences